“I hope AC/DC is opening,” I whispered to Byron as we entered the Konya cultural center, jostled through the security checkpoint along with 2,100 of our closest friends.

Downstairs, the concession and souvenir stands were open.

Upstairs, thousands of head-scarved women and devoted unscarved men sought out the best seats, chattered animatedly, and prepared to snap low-light photos with their cell phones.

In the women’s bathroom, a clucking clutch of ladies crowded in front of the mirror, removing their head coverings, taking down their hair, shaking it out, smoothing it, then rebinding it into scrunchies and covering it again.

Clearly, the electric feeling in the building indicated that this was an event.

Off for a weekend with just the two of us (our good friend Ileyn watched the kids), Byron and I had headed to the conservative city of Konya, a place known as the home of the mystical master Rumi and the base of Sufism (an esoteric branch of Islam that shuns worldliness and posits it is possible to get close to God not only in the afterlife but also during this life). Earlier that day, we had been wowed by the local Seljuk design and tile work, particularly at a madrasa (Islamic school) called Karatay. 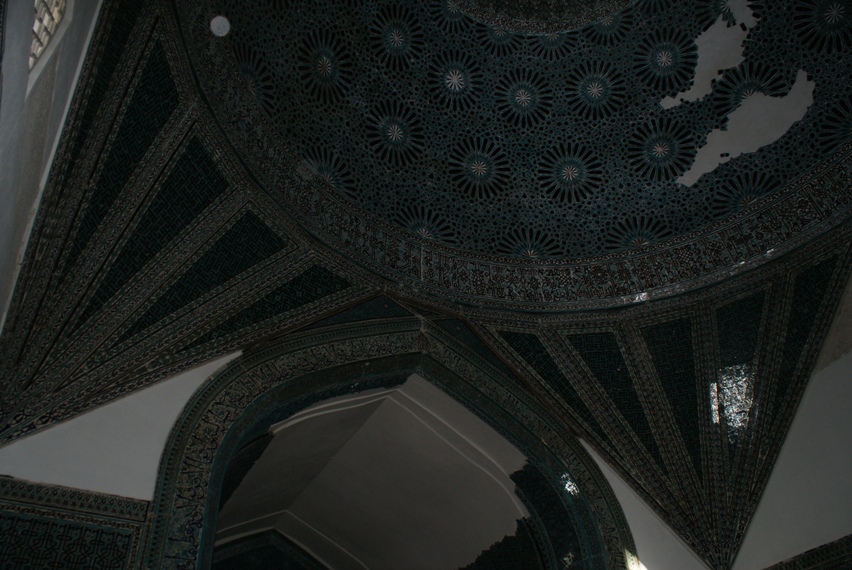 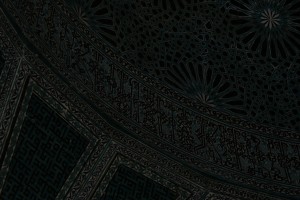 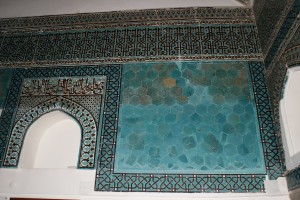 We had also visited the Mevlana Museum, where Rumi is buried and where devotees of Sufism come to pray and weep. That Rumi? He created some sort of cult of personality, for sure.

Because of Rumi’s legacy in Konya, we were excited that this city would be the place where we would, at last, get to see a sema ceremony–more widely known as “watching the whirling dervishes.” These ceremonies are held all over Turkey, mostly using hired hacks to entertain tourists, but the Konya ceremony smacked of greater authenticity, being performed for free, only once a week–rather than nightly, for a fee. Even more, we would be attending a ceremony attended by Turks, by faithful Muslims–rather than with disgruntled Germans who felt they’d been rooked on the price of the rug they’d purchased earlier in the day.

How lucky were we, to attend a sema ceremony in the most real, genuine manner possible?

Then, of course, we walked into the arena and felt the buzz of concessions, souvenirs, and groupies.

Despite the concerns engendered by that buzz, and despite the fact that the lights dimmed, and then announcer came out and forbade flash photography (“it is inappropriate during the ceremony”), yet two hundred flashes popped every single second of the first ten minutes of the ceremony, and despite the fact that the Turks in attendance never ceased chattering or emitting a nervous energy,

the ceremony was riveting. Once I shut out the twitching leg and frantic “I’m so bored” looks of the man to my left, I was transported both visually and auditorily. The music during a sema ceremony is gorgeous, a masterpiece of minor keys and steady, low thrum. The dervishes themselves are restrained, sedate, moving deliberately and without responding to external energies.

It was all we’d hoped for. 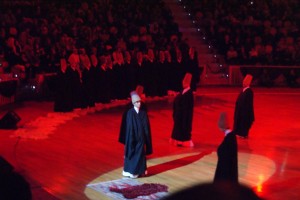 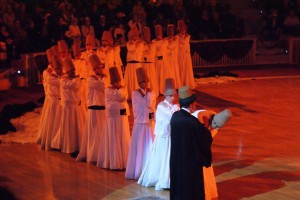 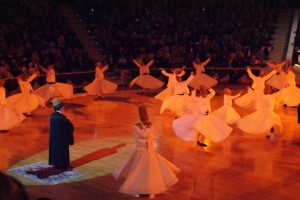 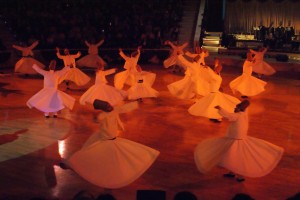 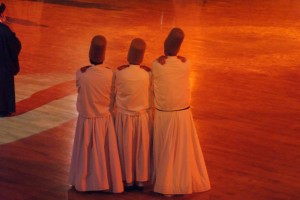 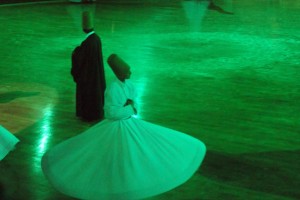 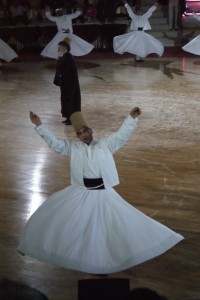 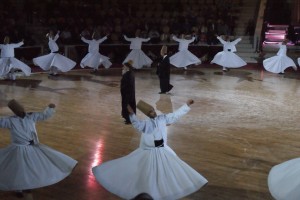 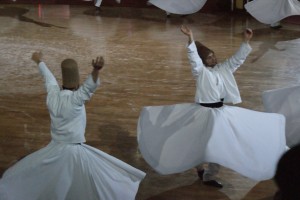 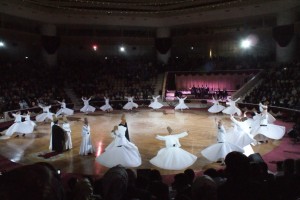 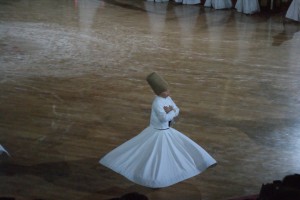 Naturally, what we hadn’t hoped for were 1,500 “devout” Turks–apparently not so well trained in how to attend a public cultural event–standing up and shuffling out, sending texts, chatting with their girlfriends, about twenty minutes before the ceremony’s finish. In the last few minutes, as the Master of the dervishes stood up and uttered two Islamic prayers, another 100 Turks decided it was time to head home so as to catch the last few minutes of the game show wherein contestants are hurled, by various means, into bodies of water when they answer questions incorrectly.

Ultimately, as affronted as we were by the Turks’ callous behavior in the middle of such a spiritual program,

the truth is that the energy of the whirl, the joy of the focus, the power of the ritual, held us rapt. Perhaps, indeed, there is something mystical about Sufism, for

even when 1,600 rustling bodies are banging their way out of a huge public auditorium, those who are willing to yield to the meditation find themselves dizzied with awe.

This entry was posted in Blog, Photo and tagged I thought we were seeing Tasmanian devils. Bookmark the permalink.