The legend of Turkish carpet salesmen looms large. Stereotypes depict them as sharks, circling as they lure buyers into spending more money than they are able–and for an inferior product. Relentless, dishonest, slick…these are the adjectives most commonly associated with the carpet salesman.

In reality, well, the reputation does have legs. Carpet salesmen do want their buyers’ money. They do want to see their rugs roll out the door at a hefty profit. They do lay down a fair amount of deliberate charm and manufactured interest, in the hopes of a payoff. It can be argued that the only genuine thing about them is their desire to see the inside of customers’ wallets and to convince their patrons to, in the future, direct business their way.

Absolutely, it’s possible to leave a carpet shop feeling like you’re Bill Clinton’s secretary, worked over by a master who steps over your muddled heap on the floor and ignores your whimpers as he extends his hand in welcome towards the next pair of bright eyes.

Before I turn this into a wholesale comparison of college instructors and carpet salesmen, I’ll simply say: at the end of the day, when we lock up the shop or close down our office hours, we’re all just people, getting by, heading home to share reaped rewards.

Thus, even though there’s an agenda at work when people walk into a carpet shop in Turkey, fair enough. Accepting the agenda is the first step to enjoying the ritual.

Required next is a willingness to get over liberal, democratic habits and appreciate that the workers in the shop are hired and paid to make both shop owner and shop patron feel superior. Once a customer’s status as Non-Turkish Speaking registers with an employee, he (No awkward “he/she” pronoun usages are necessary here; the worker is male) adopts an atittude of helpful obsequiousness.  As he scurries about making us tea, he discreetly picks up the phone and places a call to the shop owner, should he be off the premises.

If only the employee spoke English, we’d hasten to tell him not to bother.  Well, actually, do bother with the tea, but don’t bother with dragging the shop owner out of his slippers and reclining position in front of a dramatic football match on the telly.  No need for the owner to schlep his cookies all the way over to the shop in the hopes that his on-site personal charm will result in the sale of a few silk carpets, the cost of which could easily equal a quarter of my yearly salary.  Because, HELLO?  I’m telling you to keep your cookies on the couch, beyefendi, and enjoy your match, for we single-salary English teacher families aren’t worth the effort of sitting up and zipping your trousers.  Just let the worker make us our tea, and we’ll crook our necks as we peer around the joint, delighted to be in the presence of so much textile art; eventually we’ll ask a few him questions along the lines of “So, if we hypothetically ever decided to buy something, how much are your cheapest carpets?”, and then, much sobered by the quoted costs, we’ll fade away into the dusk, with the sound of SCCCCCOOOOOOOOORRRRREEE echoing from across the village.

The whole ritual of the carpet shop is one we’ve been privy to several times now.  We just want to ogle The Pretty, but then the workers start their hierarchy-based scurrying, and before we know it, we’re plunking sugar cubes into our tea and listening to the owner hide his breathless panting as he explains the various symbols dotting each carpet–from sumac to ram’s horn to tree of life to evil eye–and it’s pretty much a really awesome lesson in weaving and folk history, but then we also have to sit and watch the employees break a sweat as they lay out carpet after carpet followed by more carpets on top of those carpets (sometimes they’ll take a stack five feet high and pull off each rug, one at a time, rebuilding that stack in front of customers as the owner explains each piece…before having to remove the new heap and restack it back in the corner when all is done)…all while knowing that we’re not there to buy.  It’s hard to identify who in the room is most disingenous.

In an effort to alleviate that feeling, I’ve even tried walking in the door and announcing, “We are not here to buy anything.  We will not be buying anything.  Please do not think we are going to buy anything, for you see we’re not.  Going to buy anything.  Of the things here in this shop, none of them will be bought by us today.  Out of all the days when we have bought nothing, today is the most Day of Not Buying we have ever had.”

At that point, the workers lodge us into comfortable seats, make us tea, discreetly call the owner, and twenty minutes later we’re ahhing over the powerful symbol called “hands on hips.”  As it turns out, even if we’ve disclosed our Not Here to Purchase intentions, the carpet owner and workers are deep enough into the game to realize that No Sale Today does not equal No Sale Ever.  They know full well that if they handle us right, we could be back.  They know full well their hospitality and weaving seminar are leaving an impression.  Riddled with holes themselves, they know full well we are scattershot with weaknesses.

These experiences in carpet shops took on a new dimension for us this past week.  Out for a run one day, I’d spotted a stack of covers for throw pillows sitting outside a souvenir shop.  Since most throw pillow covers in Cappadocia are made from cringe-inducing fabrics featuring hot air balloons floating next to camels marching above whirling dervishes–all capped off by golden tassles–I’d been wondering if we’d ever find “authentic” covers to use in a Turkish-style sitting area when we return to Duluth.  But there, perkily tassle free, made out of the old hand-woven rugs called “kilims,” were a wad of them.  Hmmmm.

A few days later, Byron and the kids wandered down to check it out in detail.  It turns out the covers weren’t being sold by the souvenir shop but, rather, by the carpet shop next door.  More than an hour later, they stumbled out of the carpet shop, sloshing with tea, completely won over by the owner.

He was, um, rather charming.

“He has another huge stack of them inside the shop.  I didn’t buy any because I need you there to help whittle down the selection,” Byron reported, a bit aglow.

A few days after that, then, we all tromped down the hill and slid our way into the shop.  Within moments, the discreet phone call had been placed, and five minutes later the owner spun in, acting like there was nothing he’d rather be doing at 7 p.m. on a Sunday than sitting and having tea with us while we winnowed several hundred kilim pillow cases down to the 12 we hoped to purchase.  Throughout the process, he worked his magic, dropping thoughts ranging from “These cases are hand sewn by a 70-year-old man in Kayseri” to “Well, if you’re making a seating area in your house, clearly it’s going to need carpets to go with it!”  When I complimented him on his salesmanship, telling him that I appreciated the angles of folksy and add-on sales, he responded with, “You think I’m a good salesman?  Okay, then I’ll keep at it.”

I mean, come on.  Even that was a charming thing to say.  Dude was good, and he didn’t even need to be.  We were already committed to buying some cases.  However, as we worked at making some decisions, he lubricated the entire process.  Once we had picked out our 52 favorite cases, we started trying to identify the winners.  “If I may,” he interjected, “it could work better for you to eliminate the ones you don’t like as much before you can really see which ones you like the best.  Let’s take them all into the next room and lay them out on the floor so that you can place them next to each other and decide which ones pop out at you.”

He uttered a few words in Turkish, and that evening’s workers–probably his nephew and his cousin’s kid–grabbed the 52 cases and scampered into the next room, whereupon they laid out the entire batch.  Shop Owner looked over their arrangement and noted, “Many of these are cut from the same kilims, so like cases should be grouped next to like cases.”  More scampering ensued.  Byron, perceiving colors and patterns the workers were missing, also stepped in to help with the layout.

As I watched the four men, plus the kids, carefully stepping around the cases, bending down, moving one and then another, stepping back to take stock, stepping back in to rearrange another, I had a big flash of, “What the hell have I been doing buying throw pillows straight off the shelf at TJ Maxx all these years?  Nothing kills a pillow case buying buzz faster than choosing from four factory-created options while flanked by a gaggle of Midwestern women discussing their Weight Watchers points and proclaiming that hors d’oevres plates with bags of golf clubs painted on them are ‘classy.’  But this, THIS–now this action right here tonight is what I call buying pillow cases!”

It was too damn fun.  Things got even more fun once we took a minute to survey the expanse and started identifying those we didn’t like so much; every time we looked at each other and said, “No,” to a case, Shop Owner would pass on the order to A Worker, who would then wade his way through the squares and make the elimination.

Have you ever seen the classic Atari game called “Centipede”?  It looked a whole lot like that.

Capping off the experience perfectly was Shop Owner’s responsiveness to my moan of, “This is all so pretty when they’re laid out like this.  I wish I’d brought my camera–this whole experience is so classically Turkish!”  Disappearing a moment later, Shop Owner returned carrying a camera and took the photos below.

Of course, when he was done shooting, he handed the camera to a worker. 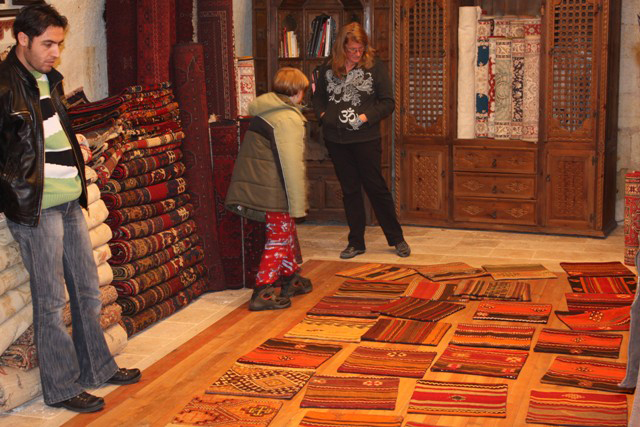 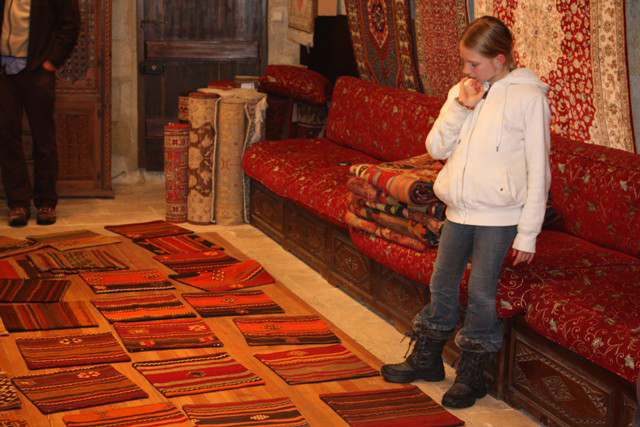 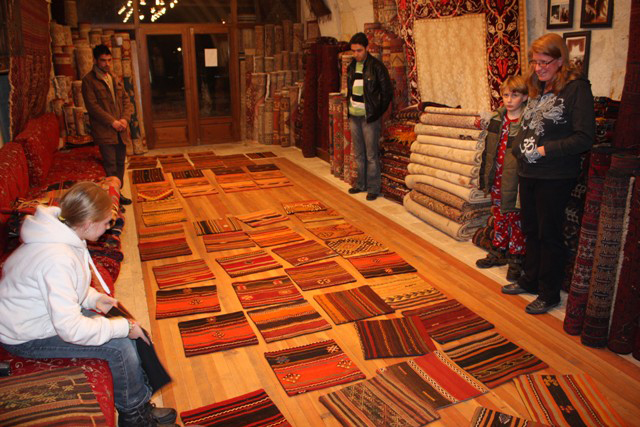 After we settled on our final 12 cases, and Shop Owner had cut us the requisite deal and extended the requisite “Come in any time for tea” invitation,

he mentioned casually to Byron,

“Also, you can come in any time so we can sit and have a nice evening and drink some local wines together. You can tell me about yourselves,

This entry was posted in Art, Blog, Photo. Bookmark the permalink.