With cold weather setting in, Paco’s getting good behind an axe. 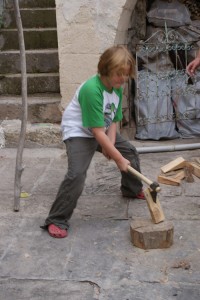 You see, central heating wasn’t on the minds of the Greek family that built our house in roughly 1600. And in the centuries since then, the sporadic inhabitants of the house, those who have lived in the house during winter, have been content to use the widespread heating method called “burning coal.”

I know. It hurts our educated middle-class American hearts, too. But with the way the house and culture are constructed, it’s the option at hand. For Allegra’s room, which can’t support a coal-burning stove, we’ve bought an electric radiator. But for the other two rooms of the house where sleep happens, we’ve gone full-on Turkish and set up sobas (little stoves that do an impressive job of heating rooms). The rest of the house–kitchen, bathrooms, hallways–will remain unheated and, we hope, tolerable by poaching warmth from the heated rooms.

Since coal prices escalate in the cold months, we were well advised to buy our coal and kindling early. Thus, a couple of months ago, we had two tons of coal delivered, along with a heap of kindling. As well, we’ve been stashing all used papers and cardboard, to further help with the lighting. We may have gone Turkish in our willingness to heat with coal, but we draw the line at igniting the stuff the way Turks do: they put the coal to be burned into a plastic bag and set the whole thing on fire–because ain’t nuthin’ burns as quickly and hotly as a good old plastic bag, assuring the coal lights easily every time.

As with most of our household projects outside of baking cookies and communicating with the external world, the role of Hero fell to Byron. There was a usable soba in our bedroom already, but the antique one in Paco’s room proved decorative more than functional. One Saturday, then, we headed to the outdoor market in the neighboring town of Ürgüp and bought a soba from a crew of nice fellows who, when we told them we couldn’t envision wrangling the thing onto the dolmus to get it home, were kind enough to drop it off at our house a few hours later. The next step was to get soba pipes from our landlord. He handed Byron a bag of assorted, used pipes which ended up satisfying half our piping needs. A few trips to the hardware store later, and Byron had a veritable pipe organ laid out in the courtyard, along with having scored a pipe cleaner (a tool at which Paco took one glance and knew he’d found a lifelong friend). 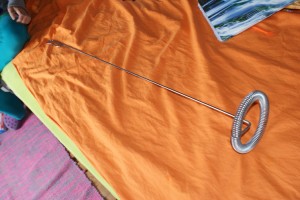 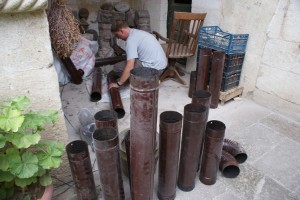 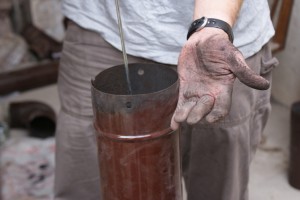 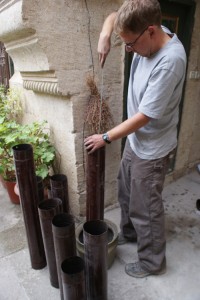 The pipe cleaner, when in use, provided kind of a nails-on-a-chalkboard sound which, perhaps not unsurprisingly, I still prefer to the ancient muezzins who shuffle in casually to the mosque next door, tap the microphone a few times, cough loudly, pant for a minute, and begin their off-key “Allahu Akbar” before their cell phones ring and are hastily silenced, all while they sing the Call to Prayer at sunrise.  (Don’t get me wrong:  when the azan is sung well, it’s a thing of beauty, but there are several warbling characters locally who are cringe inducing)

A couple of days were devoted to scouring out the used pipes and eyeballing the jigsaw of lengths and angles. Mixed in to the cleaning and eyeballing were trips to the roof to examine the chimney and ponder how to snake pipes down a thing so narrow that I’d be hard pressed to work a bendy straw down its chute.

At some point during his upping and downing to the roof, our Mightily Friendly Neighbor Hassan took an interest in Byron’s project, going so far as to climb up and extract a hard-fought pipe out of the chimney and reinsert it upside down. Sighing beleagueredly, not exactly in the mood to tolerate unrequested help, Byron drew upon the part of his Norwegian heritage that excels at keeping its mouth shut and hunkering down despite distraction.

Fortunately, even though Byron couldn’t understand Hassan’s Turkish explanations about soba installation, it was ultimately good that Hassan insisted on helping. While some Turkish men establish reputations as Soba Whisperers, and Hassan didn’t qualify for membership in that exclusive club, he did at least have a lifetime of working with and living around sobas, which made him eminently more qualified than an anthropology major accustomed to radiator-delivered heat. In short order, Hassan was inside our house, poo-pooing Byron’s efforts to safely ventilate the smoke up through the chimney. In the Turkish equivalent of “fagedda-bout-it,” Hassan directed the pipes directly to the soba hole above the fireplace. Together, with a few pips, wheets, and snortles, Hassan and Byron assembled the pipes into a fitting length and, in the course of a half hour, got the stove ready for action. 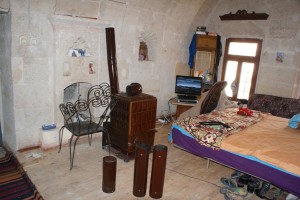 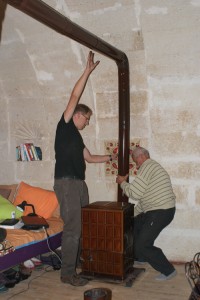 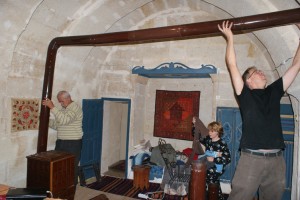 Naturally, all the best uninvited assistance is best capped off with an offer of tea and cake, but do not presume that Byron ever once indicated to Hassan that we had another room, another soba that still wanted piping. Oh no. He was about doing it himself, with the occasional aid of his willing but easily befuddled wife.  As it turns out, I may be spatially challenged, but I’m well able to stand on a chair, put my arms above my head and hold a pipe–an ability that convinces me I just might have Circus People in my lineage. 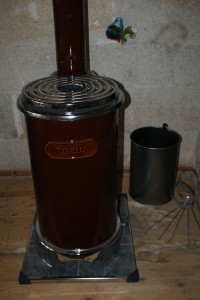 (The soba in Haakon’s room, which we bought at the outdoor market in Urgup; I assume you can understand how overjoyed we were not to drag it home on the bus)

Once both sobas were installed for the season (they are generally taken down during the warm months–although I have to say I’d be a fan of leaving them in place year ’round, simply because I believe in the concept of Effort Once Expended Is Plenty), it was time to, er, fire ’em up.

Here’s the thing:  not only am I lame spatially (but, to give me some just due, I never leave a participle dangling), I’m also a bit afeared of fire, particularly of lighting gas…long story, but it involves an oven in Colorado, an attempt at baking bread, and the loss of all my eyelashes.  As a result, I’m complete dead weight when it comes to wielding the small propane tank that is used to start the kindling and coal on fire.

I like to think my many failings are merely opportunities for Byron to shine, so shut up already.

Anyhow, for the first lighting, I had the camera at the ready, wanting to capture the flames– 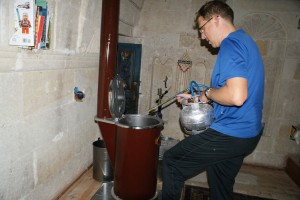 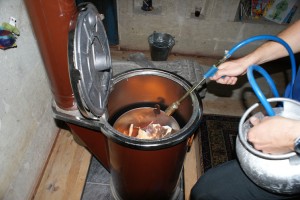 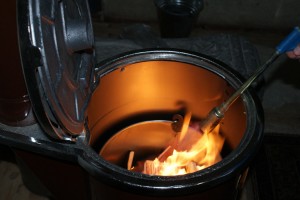 …little anticipating that the tube piping the gas from the tank to the coal would “burp,” startle our usually-unflappable hero, and cause him to drop the entire lit tank of propane. In under a second, a line of fire several feet long was running along the edge of our landlord’s expensive Turkish carpet, and both of us were struck with the realization that stone houses can burn down. As Byron tried to recapture the flailing hose of gas that whipped around the floor, I started yelling Naughty Words and looking frantically around the room for a blanket. As luck would have it, I had stripped the bedding just that day. Grabbing a pillow to whack at the flames, I looked over at Byron and saw that his ability to White Boy Dance was coming in handy as he awkwardly stomped out the line of flames.

The aftermath consisted of a few minutes of us standing, panting like aged muezzins at the microphone, feeling a bit stunned, noting that the damage had been minimal, and thinking that perhaps we could soldier our way through the winter with nothing more than wool socks and bulky sweaters.

Better sense, and two weeks out of the house, balanced our thinking, though. Now, each day when the sun sets, and cold seeps in through the cracks, Hero Byron loads the sobas with a bucket of coal, tops them with some kindling, and bravely lights the propane tank.  While my adrenaline spikes at the very sound of the thing, he matter-of-factly applies himself to ignition…

with a bucket of water at his feet.