During the first walk-through of our house, when we’d only been told “it’s a bigger, nicer place,” the landlord delineated a few things: that the mosque traffic would diminish once Ramazan was over and the nightly Islam classes ceased; that no one had lived in the place for ten years, but his wife and family would clean it up before we moved in; that his antique-dealer self had wanted to turn the place into a museum, but when he couldn’t get the permits, he let go of the idea; and…

that his mother would be making “pekmez” in the courtyard once the grapes were ripe.

By that point, we were too busy gawking at the stonework to ask any proper follow-up questions. At most, we nodded obligingly and noted we’d heard of this pekmez, a kind of grape molasses, and that we’d love to be witness to such a process, if the rental worked out. Then we started thinking about where we’d buy beds and how we’d get them to the house.

A mere month later, settled nicely in our newly-delivered beds, we started wondering when pekmez-making time would be upon us. By this point, we’d integrated pekmez into our daily diet. Byron starts each day with a mixture of pekmez and tahini on bread; I found it was the only thing that made the unsweetened Turkish yogurt palatable, and now I mix pekmez-zed yogurt with muesli for my lunch every day. When it doubt, the mantra seems to be “Add pekmez.” Just last week, I realized how it could come in handy for baking when I was making cookies and suddenly hit the “vanilla extract” ingredient in the recipe. Since there is no vanilla extract here, I wondered how diminished the cookies would be without a little splash of depth. Recalling the constant advice to add pekmez, I did.

The cookies were so good that I had to make another batch two days later.

In consistency, pekmez is thinner than the molasses we see in the States. It’s more watery. Apparently, there is “white pekmez” and “black pekmez,” depending on the color of the grape it’s made from. What we witnessed, however, was a mixing of grape colors and a process reminiscent of maple sugaring in the Northwoods because once you commit to doing it, there’s no turning back.

Last week, the women in our landlord’s family started hauling in baskets of grapes, dumping them off before heading back out to the orchards outside the village and hauling in the next load. Then, last Friday, a few huge copper pots showed up, along with some plastic tarps.

Because, really, when better to start a loud and prolonged process outside the house of The Already Sleep Deprived?

Despite the latenight noise, we were fascinated and spent a laughable amount of time skittering around inside our house on all fours, peering through the windows at the courtyard action. First, the women took turns donning a pair of Wellingtons (puddle boots) and stomping grapes that had been put inside burlap bags. They did this on a terrace that had been specially-designed for drainage, so the resulting juice flowed into a huge copper pot. Consider that there were three physically-able women on the task of making pekmez out of approximately 1,000 kilos of grapes, and you get some idea of how sore and fatigued they were by the next morning. Byron tried going out to ask questions and see if we could angle ourselves into the process, but, as is the case in this country, his gender only engendered (heehee) giggles. A few hours later, I tried going out, and I was embraced; my presence allowed all of us to get some explanation–with no English used–and a glass of straight juice. We also were shown the calcium carbonate-rich soil that is mixed in before the boiling stage. When I offered to put on the boots and help with the stomping, my arm was clutched with delight, and I thought we were in.

Unfortunately, I then heard the only English of the day, “Photo? Photo?” No, I didn’t necessarily offer to help just for the photo–although that would have been a worthy side benefit.

At any rate, the work continued, and we were taken out to the fire in the street and shown the boiling process. The fire for the boiling is also used to bake potatoes and sometimes clay crocks of beans, as well. We each were given a hot potato that was so scorching we actually had to holler “HOT POTATO” and toss it around. The ladies showed us how to crack the potato open, salt it, and then fold it shut and smash the thing into oblivion. McDonald’s is missing out on a serious Value Menu Item.

Three days after the 10:30 p.m. start of the stomping, the process came to a close, with the women clanging copper pots and chattering until after 1 a.m. The next day, they were back to put their many gallons into jars. Even though we’ve been working our way through a huge jug of pekmez we bought at the manav (produce shop) last month, we were delighted to be given a jar of the homemade stuff. I’ll be pouring it onto my pancakes well into February. 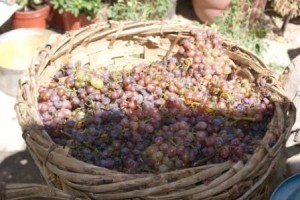 Stocking up for the next year's cooking 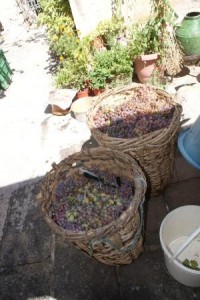 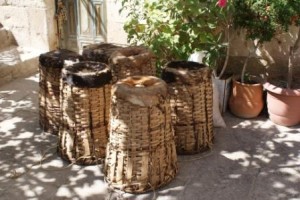 The women carried these baskets in on their backs--repeatedly, over the course of three days of preparation 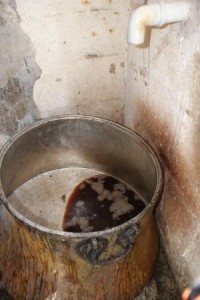 The most pure grape juice ever 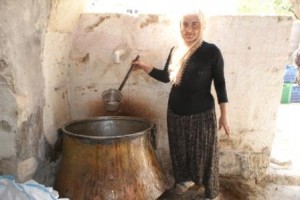 Our landlord's wife, with a ladle and a smoke 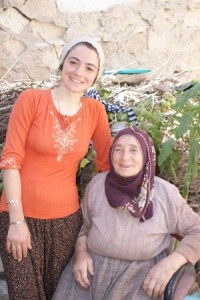 Our landlord's sister and mother; they are stripped nearly naked (in their terms) here, due to sweating so much during the work 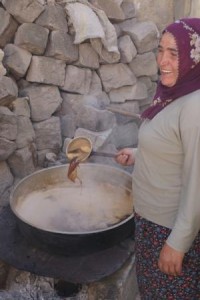 This woman was also amazing at the stomping; it seemed the other ladies deferred to her greater weight and let her do the bulk of the juicing 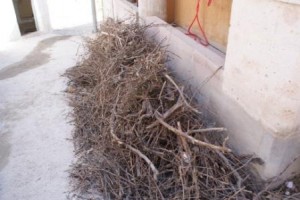 Fuel for the fire 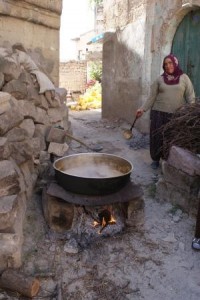 Outside our main gate, next to the mosque, she stands for nearly two days, skimming the foam and roasting potatoes in the ashes 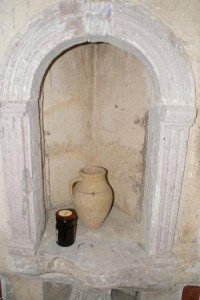 As with most things in this country, the new grows out of a tradition of old--it's all comparative history